This weekend gives us a chance to break away from the rigours of the Premier League and focus on a competition we have a realistic chance of winning.

After safely navigating our way past League One side in the third round of the FA Cup, many Spurs fans were delighted to see us draw another lower league side in Newport County.

It appears many thought that progression is already assured and whereas ‘should’ be correct, we may find Newport have something of a nasty bite if not treated with respect.

So, what can we expect from our trip to Rodney Parade and will it be a walk in the park?

Where are Newport in the League?

Currently plying their trade in League Two, the side known as the Exiles find themselves sitting just one place outside the playoffs in eighth.

So far, manager Mike Flynn has guided Newport to 12 wins, 10 draws and 7 losses all season to leave them just 11 points off league leaders Luton Town.

Coming into the game, the Exiles are on a run of form that has seen them unbeaten since Boxing Day.

At the weekend, Newport travelled to 17th place Cheltenham and came away with a 1-1 draw after Town’s Mohamed Eisa’s equalised in the 77th minute after County’s Padraig Amond looked like giving the Exiles another win.

With four wins in January in all competitions, Newport will be a sterner test than many predict.

Who are the Danger Men?

Third round FA Cup hero Shawn McCoulsky is the main threat up front and is the club’s top scorer this season with ten strikes. 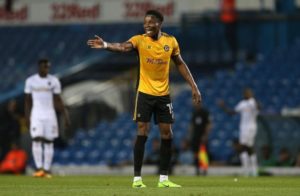 Former West Ham striker Frank Nouble is also at the club and boasts eight goals and four assists this season making the 6ft 3in former England Under 19 man a serious attacking prospect.

How have they got this far?

Although Tottenham’s 2017/18 FA Cup exploits have comprised just one game so far (the 3-0 home win over AFC Wimbledon), Newport are gearing up for their fourth match of an impressive run.

A 2-1 win over League One Walsall in round one at Rodney Parade got things off to the perfect start.

They followed this up with another home tie this time against fellow League Two side Cambridge United and an easy 2-0 win followed thanks to a brace from midfielder Joss Labadie.

Then the giant killing occurred as Shaun McCoulsky nodded home in the 89th minute to give the Exiles a superb 2-1 win over Championship side Leeds United.

Although there is a distinct difference in quality between Leeds and Spurs, Newport will once again be up for this especially on home soil.

However, Tottenham will be buoyed by the possible return of Toby Alderweireld to the fray and the possibility that this could be the best chance of silverware this season.