A risky subject this one especially as the January transfer window has just opened, but despite having broken Alan Shearers premier league goal scoring record for a calendar year with 39 league goals, no one seems interested in a bid for the 24-year-old.

It is hard to image than just seven years ago, Kane was turning out for Leyton Orient on loan. Little did anyone know then that the Englishman would turn out to be one of the worlds most prolific marksmen in the world, especially after netting a whopping 56 goals in all competition throughout the year. 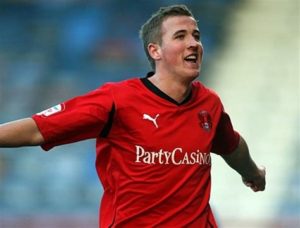 (Kane during his loan spell at Leyton Orient)

That tally is one more than Barcelona superstar Lionel Messi and leaves Kane top of the pile when it comes to European strikers.

Despite all these achievements, the rumour mill surrounding Harry is dead in the water and this a very good thing for Tottenham fans but something of a surprise, especially when you consider mammoth sides such as Real Madrid are in desperate need of a striker.

However, I believe I may have stumbled across a few reasons why Kane will not be leaving Spurs this window or any window for that matter.

Levy is a chairman known for his hard negotiation tactics and will only ever let a player leave under his own terms.

Somehow, he manages to get away with paying his players less than rival sides and still maintains a relative peace in the camp.

The sale of Gareth Bale and Luka Modric are proof enough that it is Levy’s way or no way as Real Madrid have found out twice and that will no doubt out clubs off from dealing with Spurs for their top players as a lengthy transfer saga is likely to ensue.

In a world where Andy Carroll was deemed worth £35 million way back in 2011 and Neymar Jr went for €222 million to PSG in the summer, Kane must be worth something in the region of half a billion.

That may be an exaggeration, but Kane would command a high fee for more than just his goal scoring exploits of 2017.

2017 was no flash in the pan, Kane has been consistently a top Premier League goal scorer for about four years now and that is vital.

Form comes and goes but for Kane (aside from August) it is permanent.

Harry is not a fashionable name

It may sound silly, but it could well be true. British names just don’t seem to attract bid foreign bids.

Maybe if you stuck a Jr on the end or called him ‘Harry van Kane’ then all of a sudden, his commercial value shoots through the roof.

Why would he leave? There are very few sides who could actually afford him, PSG and Manchester City.

Right now, under Fifa fair play rules PSG probably couldn’t afford him after that hefty Neymar Jr fee and at City Kane would face competition from Sergio Aguero and the younger Gabriel Jesus.

Perhaps the headline is a little misleading as one-day Kane will leave Spurs, but the important thing is that Tottenham will hang onto him for the foreseeable future and that is only a good thing for Spurs, England, the Premier League and the belief that home grown talent can make it all the way to the top of the footballing tree.